Benefits of our unique ABA-VB Therapy

Introducing the most holistic therapy for children with Autism Spectrum Disorder (ASD) and other developmental delays.

We're the only centre certified in the ABA-VB approach and trained by its founder Dr James Partington, Ph.D., BCBA-D.

At Autism Recovery Network (ARN), we adopt our own unique therapy method known as Applied Behavior Analysis – Verbal Behavior (ABA-VB), founded by Dr James Partington. Watch the video to learn how we teach our children using our ABA-VB approach.

Benefits of our unique ABA-VB Approach VS other ABA Therapy 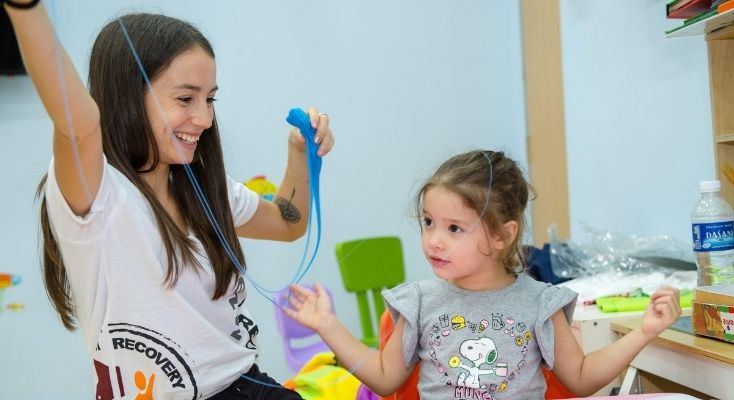 In contrast to the ABA therapy, our unique ABA-VB therapy is a highly advanced and effective programme.

It uses a functional yet compassionate approach that focuses specifically on verbal communication rather than performing the desired behavior as seen in ABA. Our results have been shown to be successfully achieved while keeping the entire therapy effective and enjoyable for the children.

Our unique ABA-VB therapy is effective for children with developmental delays.

Our all-inclusive and progress-driven curriculum is guided by an internationally recognised assessment tool called The ABLLS-R®, which stands for Assessment of Basic Language and Learning Skills-Revised. This revolutionary tool was developed by Dr James Partington, Ph.D., BCBA-D, and based on years of scientific research into how young children acquire new skills.

Did you know that, on average, a typically developing child masters 544 different skills by the age of 6 before starting school?

As the research dives deeper, it was discovered that children with developmental delays who don’t undergo intensive early intervention begin to fall behind as early as 6 months of age. Many only acquire a fraction of these skills by the time a child goes to school. From a well-researched approach, our unique ABA-VB therapy aims to fill those gaps.

The Results From Our Unique ABA VB Therapy

To help you understand, watch the video from a parent on why she only trusts ARN’s unique ABA-VB therapy and how ARN has helped her child succeed in life.

Our unique ABA-VB therapy goes beyond just memorising definitions and correcting behavior patterns. The end result that we want for your child is to understand words and use speech actively in their daily life. We want to provide a firm foundation for your child to eventually lose their diagnosis.

The path to mainstream schooling

Research shows that a child needs 544 skills in order to enter and thrive in a mainstream school. Through our ABLLS-R assessment and tracking system, we are certain that your child will have all the required skills in place to adapt to different settings and situations. Enrolling into a mainstream school will be significantly easier for your child once they complete their therapy with us.

Who is ABA-VB therapy for?

More On Our Unique ABA-VB therapy

ABA Therapy is an intensive, structured teaching programme that simplifies complex sets of behaviors and skills into simple components. Children will learn through trials and are tested on how they respond to a stimulus (e.g. sound or object). A correct response will help a child receive a reward. An incorrect answer will result in being ignored or even punished.

It is of utmost importance for parents to understand that ABA and ABA-VB are two very different forms of therapy.

How did ABA-VB Therapy first started?

In the beginning, ABA therapy was first introduced in 1967 to treat children with ASD, and it became popular in 1993. The groundbreaking research was published by psychologist B.F. Skinner and his colleagues. Extraordinary gains were also well documented in an article titled “Long Term Outcome for Children With Autism Who Received Early Intensive Behavioral Treatment” by McEachin, Smith, and Lovaas, as well as the published of Catherine Maurice’s book “Let Me Hear Your Voice” about her two children’s recovery from autism.

Subsequently, Verbal Behavior (ABA-VB) was founded by Dr James Partington, Ph.D., BCBA-D. The Verbal Behaviour Approach to Applied Behavior Analysis emphasises verbal communication rather than the performance of the desired behaviour as seen in ABA. It aims to demonstrate to the child the value of communicating in words to get their desires met. This makes sense when we observe that children’s initial language use usually serves their desire to obtain something from someone.

What will my child learn in ARN’s ABA-VB Session?

In ABA-VB, the child starts by learning to mand – which means to request desired items, information and activities. Care is also taken to teach the child to mand the desired object ONLY when they are naturally expressing interest, such as manding for snacks when hungry. This is unlike traditional ABA, which does not care if the child is interested or not as long as they can perform the requested task. As the child becomes more motivated and competent with language, the following aspects of language are introduced and reinforced while maintaining the motivation to communicate verbally:

Claim Your Free Assessment (For 7 Years & Above)

Claim Your Free Assessment (For 3 to 6 Years Old)

Claim Your Free Assessment (For 2 years & Below)